If you have been fortunate enough to visit Avoca Park you know that this amazing facility is nestled into the countryside amongst the beauty of the Yarra Ranges and Mount Dandening. Our Maintenance team play a huge role in creating and maintaining our wonderful facilities. Their hard work and dedication is visible and very noticeable each and every day they are at work. We are blessed to have them in our very hard working team.

Let us introduce you to our Maintenance team. John and Leanne first saw this 12 acre block for sale, in a place called Macclesfield in 1991. It was 12 acres of Tee Tree with not a thing on it. After watching the property on the market for 8 months they eventually got an opportunity to put in an offer they could afford and it was accepted straight away- after paying their deposit and taking over ownership 3 months later, they were still renting about ½ an hour away in Mt Evelyn at the time. They moved the horses onto the block and then purchased a 20 x 40 foot shed in which they spent every weekend building and preparing for their arrival.

Johns role in Avoca Park’s maintenance began as they excavated the driveways, the shed site and of course the site for the indoor arena. They then started erecting the shed, once the shed was up, it got decked it out and that’s where Leanne and John lived for 11 years while they built the stables, the arena and their house. Over the next few years, they worked and built and worked and built….

They cleared the whole block of tee tree with a hand slasher as they could not afford a tractor then. They slowly built the fences, as when they first moved in there were no fences and while they lived in the shed they would wake up to the horses looking through the windows.

When they looked into building an indoor arena they discovered the materials were affordable, but the labour was not, so they decided to build it themselves and so the indoor was built.

As the business grew so did the type of clientele and now they were wanting to run clinics, the Bunkhouse was designed and developed along with our Apartment to host the presenters. This led to needing an outdoor arena for the development of the riding school, so our little outdoor of 18m x 35m was built.

John’s job is to make sure everything is working as it should and his favourite part of the job is seeing progress in the way horses develop in their training at Avoca Park.

His favorite horse is Spencer (Avoca Park’s Resident Stallion, aka “Avoca Flaunt It”) because he is a gentleman and his fondest moments at Avoca Park “are when I come home and look at how much Leanne and I have achieved.”

James has been working in maintenance and as a gardener for us at Avoca Park since December 2019. This has been his first job in a maintenance role on a property like this and he has taken to it like a duck to water. He has a quiet and calm personality as he works methodically through all his assigned tasks. His favourite part of the job is “working outdoors in the quiet countryside among trees, when the weather is fine”. He has taken great pride in learning all the skills needed in his role, such as learning how to brushcut, build and maintain fencing, drive the tractor and he recently completed a course in safe chainsaw handling.

He has always loved animals but this was his first time being around horses. He has been a quick learner, all while he is patient, kind and considerate. He always keeps awareness of horses approaching and has been learning all the body language from a horse to know when he should shut down his machinery. His favourite horse is Avoca Marcus, because he comes to James for pats, he also likes the donkey Johnny Simpson, because he can be overlooked sometimes with all the horses running around. “Plus I like the sound he makes when he sees breakfast coming up the hill ????”

James has become an integral member of our team and he keeps the property looking amazing. His role is quite independent as he works in various locations around the property- clearing paddocks, fixing and building fences, planting new plants and maintaining our driveways. At our monthly meeting his insight and contributions help us shape the development of our facilities and we have loved having him as part of the Avoca Park Team.

His favourite part of the job is noticing the changes in the grounds/gardens and paddocks since the beginning of 2020, when he started. 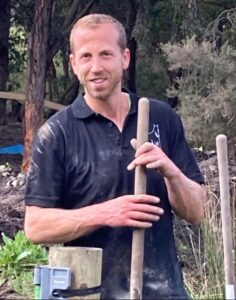